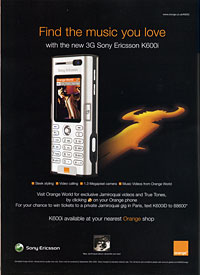 The advert says that if you are an Orange mobile phone subscriber (in the UK), you can download "exclusive Jamiroquai videos and True Tones."

Additionally, they are running a competition to win 5 pairs of tickets to the previously announced private gig in Paris.  The Terms and Conditions of the competition (which runs until 30 September) reveal that the gig will be held in Paris on 10 October 2005.

i like the promo poster. we don't have orange in the USA, as far as i know, but if you have TMobile Phone Service, you can download lots of Jamiroquai stuff. As your ringer you can choose Virtual Insanity or Canned Heat. It's the actual song. And as your caller tune (the song that plays in the persons ear that is calling you..kinda like hold music), you can pick Virtual Insanity, Canned Heat, Return of the Space Cowboy, Love Foolosophy or Cosmic Girl. They will play for about 30 seconds - until you pick up the phone or your answer machine comes on. I'm sure other stateside mobile companies have something of the same. Maybe they'll get some stuff from the album when the album drops here.

Flower: please can you tell me where it says fifty? On the Terms and Conditions page linked from the news item I see it says "Prize fund = Trip to Paris to see Jamiroquai x 5 pairs".

Flower mixed with a current WAP contest being run by Orange France...

you don't have to download these off the networks, you can make your own snippets and send them to your phone by bluetooth or usb yer know!

oh and that number to text 88600 does not work , it says - do not understand message?
can you enter by emailing your mopbile number?

Russ: I believe there was an email address you can use in the T&C's webpage. Maybe give that a go.... Perhaps the SMS number will work from tomorrow (1st Sept)

I got that "do not understand message" message, and so i tried the email and it didnt send properly - got an error report email saying it had been rejected. I NEED to win those tickets!!!!!
(well, don't 'need' to as such - i'd just be rather pleased if i did)

I contacted the people involved with the competition etc. and they're investigating the problems. I have this morning (Friday) just sent an SMS to 88600 and got the reply "Thank you for your entry". I guess it's working now.

MTV in the UK started airing the video for King For A Day this week in 1999.